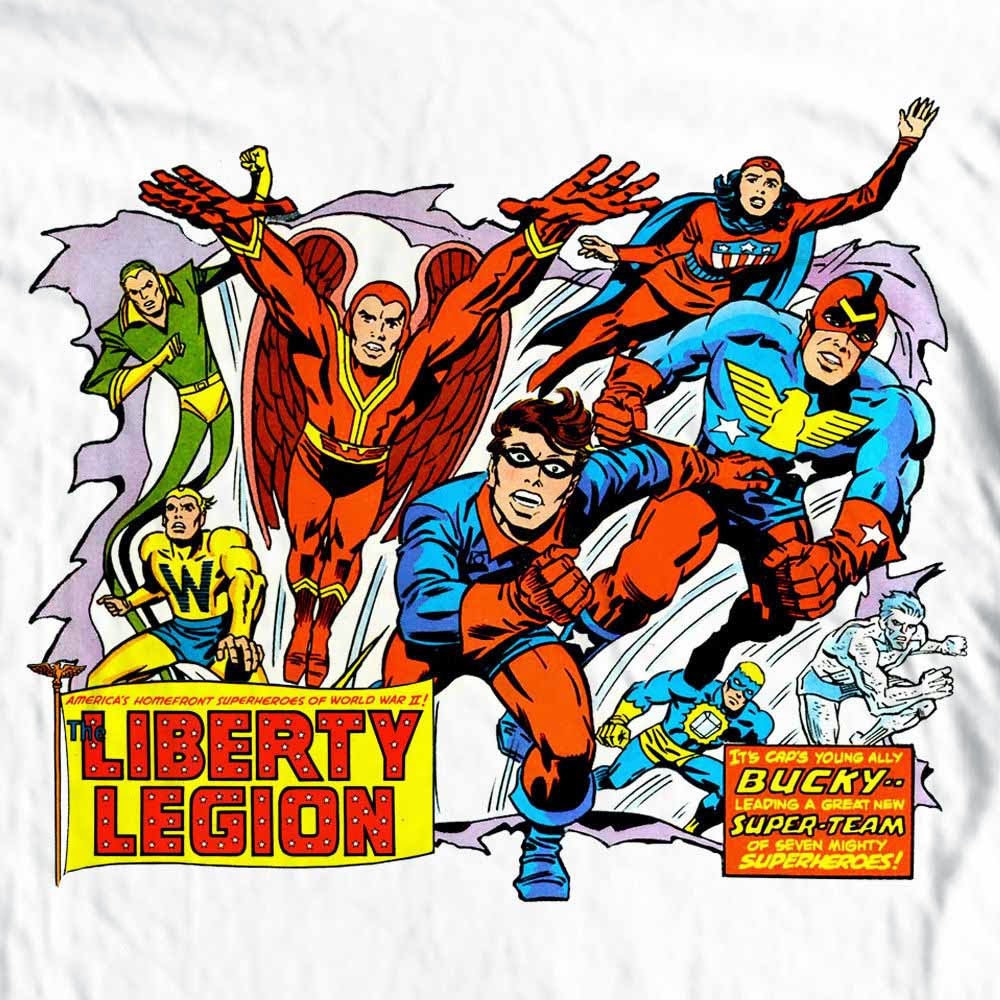 This super hero team was first created in 1976 but was set during World War II. The team consisted of existing heroes back from Marvel's 1940s Golden Age of Comic Books.
"America's Homefront Heroes of World War II", the Liberty Legion consisting of mostly obscure Timely Comics (pre-Marvel) superheroes, rather than stars like Captain America, the Sub-Mariner, and the original Human Torch, and sidekicks. The Liberty Legion, indeed, included only two of even the company's secondary tier — the Whizzer and Miss America, who in late-1940s comics were members of Timely's first superteam, the All-Winners Squad. In the team's modern-day retcon origin, the Liberty Legion was assembled in 1942 by Captain America's sidekick Bucky, the only Invaders member to escape a brainwashing trap by the Red Skull. To rescue his teammates, he gathered:

Jack Frost (U.S.A. Comics #1, Aug. 1941)
Jack Frost has the ability to generate sub-freezing temperatures. Combined with ambient water vapor, he can create snow, sleet, and ice for various effects such as propelling snow flurries at hurricane wind-speeds or fashioning ice into various simple constructs such as spheres, bridges, or walls. He also has superhuman stamina and durability.

Miss America (Marvel Mystery Comics #49, Nov. 1943)
Miss America was a natural athlete,with the gymnastic ability, agility, and reflexes of an Olympic contestant. She was schooled in unarmed combat by Captain America while she was a member of the Invaders. Miss America possessed superhuman strength to an unknown degree (she purportedly possessed the "strength of a thousand men"---1,000 men who can lift 200lbs=100 tons)

Patriot (Human Torch Comics #3, Spring 1941)
Mace was originally the longest serving Captain America (1946 to 1952, which was longer than the original Rogers before Rogers was found and revived). Mace is now the second- longest serving Cap outside of RogersIn his prime, Jeffrey Mace was a superb hand-to-hand combatant and an exceptional all-around athlete. Jeff Mace is a licensed pilot. As Captain America, Mace used a shield resembling the ones carried by his predecessors. While it was made of enhanced titanium, Mace's shield did not have the same virtually-indestructible properties of Steve Rogers' shield, though Mace became proficient in throwing it as an offensive weapon.

Thin Man (Mystic Comics #4, July 1940)
Comics' first stretching hero, predating Plastic Man by just over a year. The Thin Man (Bruce Dickson) has been genetically modified to be able to shift and distort his body's molecular structure partially out of phase with three-dimensional reality. He can stretch or twist himself, absorb impacts such as bullets without harm, and become nearly two-dimensional by shifting part of his body mass into alternate dimensions. His limbs can effectively become blades in the process. He does not age and is seemingly immune to all known diseases.

Whizzer (USA Comics #1, Aug. 1941)
The Whizzer had mastered a style of hand to hand combat which exploited his ability to move at superhuman speeds. The Whizzer possessed superhuman strength primarily in his lower body as part of his body's adaptations for running. With his upper body he could lift slightly more than a normal human being of his age, height, and build who engaged in intensive regular exercise could. In his prime, the Whizzer could leg press approximately 1500 pounds under optimal conditions.

Thanks for listening.
This blog sponsored by B.L.Tees. With 2 locations filled with retro hard to find graphic t-shirt designs, you won't need to go anywhere else. Always FREE shipping.